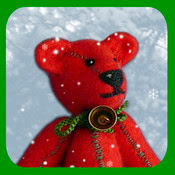 Imagine a story where a child’s bear has adventures, a bear like Winnie the Pooh perhaps, but one who is making his own way in the world, far from home, like Paddington Bear. Combine this story with fantastical tall tales such as those told by Baron Münchhausen and you have “The adventurous journey of Bobik Bombastinov” - a unique app that is imaginative, adorable and genuinely funny.

Bobik is a child’s red felt bear, somewhat crudely sewn together and sporting a little bell around his neck which tinkles when tapped. This ebook is Bobik’s story, narrated by the child who loves him. She introduces us to Bobik as the last direct descendant of Tsar Bombastinov, shows us something of his happy life as commander of Kiev and then his shocking banishment by the evil wizard Pustinov. At this point Bobik’s adventures begin in earnest as he journeys across the world trying to find suitable employment.

With many interactive audio elements hidden within its 45 pages, this book is both engaging enough to occupy a child reading alone and gentle enough for you and your child to discover together at bedtime – no doubt leading to dreams of adventure and granted wishes! While each page is a very professional photo composition, many of them also have the feel of something a child would create at home – Bobik ‘flies’ from Kiev on a dragon ornament with the blue skies represented by a blanket and the huge sea monster that later attacks him is a frog bath toy. If you know a child who loves telling stories about their toys or if you want to inspire a child to try some pretend play then this app is perfect for you.

a Rafflecopter giveaway
Posted by AppAbled at 00:50