For September 18th and 19th, Grimm's Frog King is reduced in price to only 99 cents. If you'd like to try your hand at winning a copy of the app then you can enter via the Rafflecopter below. 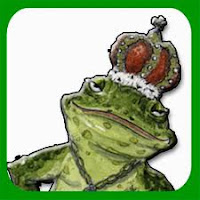 Description: With Grimm's Frog King, you can enjoy the best of both worlds. This app includes both the traditional version of the Grimm's folktale and a version that is... well, not so traditional!

With the traditional version of the story, your child can immerse themselves in the enchanted world of fairy tales. In addition, they will be learning timeless lessons such as: don't make judgements based solely on appearances and promises should neither be made lightly nor broken.

The second version of the story points out the many things about tales from a bygone era that seem very alien to us, but in a way that will have both you and your child giggling. Read right to the end of the story to see pages from a very unusual family photo album! This story version is best suited for children 8+ and for adults!

Mentions: Featured in the books category of the Swiss app store since its release.

Reviews: Read reviews of the app on the JustKidsApps website.

Watch the app in action:

iTunes link for Lite version of the app


a Rafflecopter giveaway
Posted by AppAbled at 20:22