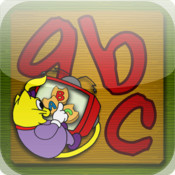 WiseCats' YouTube animated alphabet songs have been so popular, 3.3 million views, that we’ve decided to make learning the alphabet even more fun. ABC PlayTime provides children with the opportunity to play with our fun characters while learning; letters names, letter sounds and how to write their letters.

They can either watch the alphabet songs, or they can enter into the animation and play inside it.

They won’t even realise they’re learning their alphabet as it is so much fun. 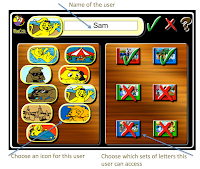 You are able to set up a login for up to four different children. Each child has a book of their own called ‘Me’. Clicking on this book allows them to start playing with the letters of their name. As they play they can attempt to write the individual letters of their name or touch their name tile to attempt to write their whole name. Their writing is saved and shown on the screen so they can see how well they are doing.

There are seven other books available which you can slowly give children access to. As their alphabet knowledge increases they will be able to see their writing; showing which ones they can now write. They will be able to see each letter they have learnt to write - and it will be in their own finger writing.

Once they choose a book they are given the ability to either “Play” or “Watch” the alphabet songs for that book. 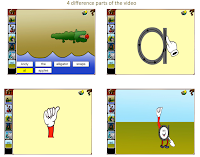 If they choose the "Watch" option, then the songs for that book will be sung to them. Each book consists of 5-6 letter pages and a final wrap up page. Children are able to skip between the pages.

* Each letter has its own alteration song and animation. This is followed by a catchy letter sound repetition, followed by the letter name. During this they are shown both the hand sign and how to trace the letter.
* As the song is sung the words are highlighted along the bottom.

* The catchy “wrap up” helps to reinforce the letters and encourages children to track the letters as they bounce across the screen.

This is a really fun screen that allows children to:
* Touch ‘hidden’ points within the animation.
* Watch the song with the words growing as they are sung
* Watch just the hand sign and tracing part of the song
* Practice writing the letter while hearing the letter name or letter sound. 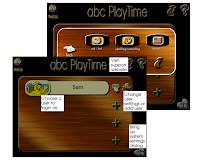 You know what’s best for each child, so you are given control of:
* The order in which letters are introduced
* Which hand sign: ASL/BSL
* The accent for the song: US, UK, NZ
* Whether you prefer the letters to be sounded out or the letter name to be said as the child practices writing.

WiseCats have had a huge following for a very long time.  It is great to see them now becoming apps.  The characters are cute incorporating BSL or ASL.  The alliteration in the sentences and the songs are just lovely.  I like how your child can write their name and they see the activity completed on the screen.  The phonics and writing of the letters, the constant reinforcement of the phonic sound is so good for our children to help them on the path to decoding for reading.

a Rafflecopter giveaway
Posted by AppAbled at 18:04