Treasure Kai and the Seven Cities of Gold - Review and Giveaway 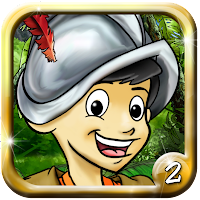 Treasure Kai and the Seven Cities of Gold 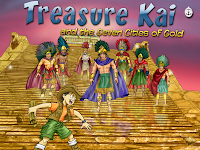 Treasure Kai and the Lost Gold of Shark Island was one of the very first apps I ever purchased. It was an instant hit with all of my children and is still one of my favourite apps.
I eagerly awaited the release of Treasure kai 2 and I can tell you it was worth the wait.
Treasure Kai and the Seven Cities of Gold is every bit as engaging as it's predecessor. 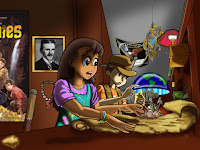 The Treasure Kai apps are a modern version of those wonderful choose your own adventure books that I adored when I was young.
The stories are based on the adventures of an intrepid young explorer, reminiscent of a young Indiana Jones, called Kai.
The lead in to this story ties nicely into the previous app with Kai and his sister Kate both retelling the same dream they had about Shark Island. Kai wakes up to find a treasure map in his pocket and so begins their new exploit. 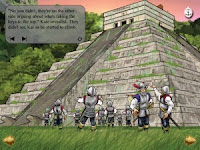 After following a clue Kai finds with the treasure map and Kate's memory from their dream Kai is transported back in time to 1540's Mexico where he is greeted by the sight of Francisco Coronado and his men who are searching for the Lost Seven Cities of Gold. When Kai realises they have the same map as him he decides to join the quest and race them to find the seven keys he learns they need to unlock the location of the hidden Lost Seven Cities of Gold. Kate is able to join in on the quest when she discovers a locket that magically lets her see, hear
and communicate with Kai. 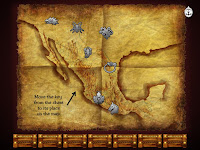 Kai and Kate lead us on a swashbuckling adventure to track down all seven keys. Each time a key is found and inserted in the correct spot on Kais treasure map he is transported to a new city with a challenge to complete. Longevity is added to this app by the added bonus of the keys position in the treasure chests shuffling each time you read the app, therefore changing the retelling of the story.

Beautifully illustrated and with animation and soundtrack added this app has an engaging quality rarely found in a book app. Interaction on each page and the need to choose and place the keys on the map to continue the tale really makes you feel as though you are part of the action.Read to myself or read to me options with all important sentence highlighting make this app suitable for a variety of ages and reading levels. The narration is excellent and  being Australian, I personally adore the fact Kai and the Narrator are both from my and my children's homeland.

I am a huge fan of Karen Robertson and her second app has certainly not disappointed.
There are no social media links or in app purchases. There is however a link to the Treasure Kai website where your child can play Kai's on-line video game, learn some fun facts relevant to the story and lots more.

Overall Treasure Kai and the Seven Cities of Gold is well worth it's $4.99 price tag. Massive amounts of content and interaction as well as the high quality of this app make it great value for money. All four of my children aged from 4 - 10 have loved playing it and it is on high rotation at present. As for improvements to this app, I really can't think of any. My only wish is that Treasure kai 3 is not far off.