The Swan Lake By Publisto - Review 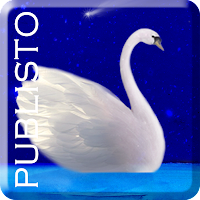 The Swan Lake - by Publisto

Rated 4+
Requirements: Compatible with iPad. Requires iOS 4.2 or later.
IF YOU WOULD LIKE TO PURCHASE THIS APP PLEASE DO SO VIA THIS LINK iTUNES 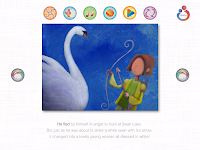 The Swan Lake by Publisto tells the story of Prince Sieg and his true love Princess Odette and how Prince Sieg must overcome the powers of the evil Von Roth and his spell over Odette so they can be together.  The story is based on Tchaikovsky’s classic of the same name.

The story is beautifully depicted with fantastic artwork.   Much of the artwork has interactive features that the reader can touch to reveal a surprise action.  The highlighted narration is interestingly done and definitely helps to hold interest.  The background music of the app is Tchaikovsky classic music that makes this ebook easy listening on the ears! 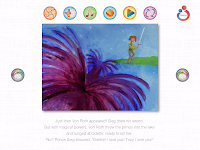 Prince Sieg is introduced.   It is his 20th birthday and a great ball is thrown in his honor.  He learns he needs to choose a bride that night before the whole palace. He only wants to marry for love – how can he choose a bride in one night.

He flees in anger down to the lake to go hunting - a lake known as Swan Lake.   Just as he is about to strike a swan with his arrow she transforms into a beautiful young woman. 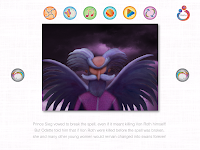 Prince Siege asks her what type of creature she is.  She replies that she is Princess Odette.  She explains that the evil warlock Von Roth, in the form of a horrible bird, put a spell on her.   She is a swan by day but a human by night.

Prince Sieg vows to help her and break the spell.  Princess Odette explains that her spell can only be broken if she is loved by her one true prince.

Prince Sieg returns to the palace to the ball to find Von Roth.  The ball is in full swing with princesses seeking the hand of the prince. He only has thoughts for Odette.   Von Roth sees this and fools Prince Sieg by transforming his own daughter into Princess Odette’s image and the Prince dances away the hours unaware that he has been tricked.  Princess Odette observes the pair dancing through the window and flees to the lake sobbing.  When it is time for Price Sieg to make his choice of bride known, Prince Sieg realizes he was tricked and heads to the lake to find Princess Odette.    He finds her sobbing – he asks for her forgiveness as he was fooled into believing he was dancing with her. They both declare their love for each other. 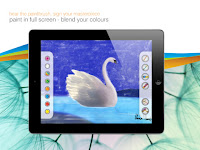 Von Roth appears next to them and throws Prince Sieg into the lake and tries to kill Princess Odette.   Price Sieg shouts out his love for Princess Odette. This declaration of love causes Von Roth’s powers to start to fail til he finally goes up in a puff of smoke.  The spell is broken. That morning Odette does not become a swan.  She marries Prince Seig and became a queen - a swan to a queen.
The story is beautifully depicted with fantastic artwork.   Much of the artwork has interactive features that the reader can touch to reveal a surprise action.  The narration is interestingly done – lot of animated voices and definitely helps to hold interest. 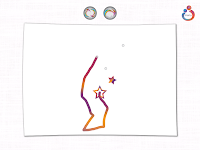 In addition to the story there are some games and activities.
One of which is a jigsaw puzzle. There are six jigsaw puzzles in total wherein the pieces are dragged and positioned into the frame which serve as excellent fine motor skill practice.  The amount of pieces for each puzzle can be customized to suit needs either 6, 12 or 20.

Following the jigsaw puzzles there is a drawing page to color in some artwork with may different choices to select.

A third game is a connect-the-dot type game with a small star that follows a bigger star. After two failed efforts the correct way is shown. Sound is used to reward success.  Upon completion the outline is a pattern for something i.e. in one instance the happy couple together and it appears on the screen with a musical fanfare.

A fourth game is a matching game of cards with images from the story. The game is played with either 16 or 30 cards to change the difficulty level.  Some pretty impressive fireworks appear once the game is won!

A final feature is one where cute postcards can be written and sent via social media.   I am not a fan of social media within apps that are easily accessible to children so this is a feature I would prefer not to have or at a minimum be done with adult supervision only.

Overall this is a beautiful story with quality illustrations set to the classic music of Tchaikovsky - what’s not to like.