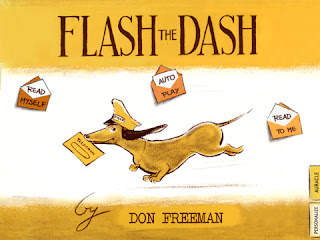 Generations have grown up with Don Freeman's picture books, and many of today's parents are reading aloud the same favorite books that they loved as children.

In 1973, Flash the Dash, his twenty-fifth children's book was published. Don tells how he got the idea for this book: "As best I can recall, the idea for Flash the Dash began creeping up on me a few years ago, right after meeting two lively dachshunds who belonged to a friend of mine. These two dogs wanted to play games with me and they wouldn't take 'No, not now' for an answer. I remember innocently throwing some sort of object as far as possible, only to have them dash after it and bring it back and lay it in my lap. I suppose they took turns. Anyway, this so-called game went on and on until my arm and patience grew weak to the point of exhaustion. But they weren't exhausted at all!

Little did I know that these two perpetual-motion pets would continue chasing me in my mind for months afterwards. Finally one day I sat down and started putting together a story about a dachshund that delivered telegrams. The name Flash came naturally but the name for his mate took a bit of head scratching. Yes, she had to be Sashay."

Flash the Dash is a part of the Auracle line from Auryn Inc. and is based on Don Freeman’s book by the same name.

Don Freeman was a painter, printmaker, cartoonist, children's book author, and illustrator. He was born in San Diego, California, attended high school in Missouri, and later moved to New York City where he studied etching with John Sloan. Frequent subjects included Broadway theatre, politics, and the circus. He was also a jazz musician, and the brother of circus entrepreneur Randy Freeman.

Key features include
★Personalisation of picture, voice and text:
★Kids can become their own narrator or listen to their parents narrate the book.
★Interactivity allows kids to personalize the sentence, create new action words and sharpen their vocabulary skills
Features on each page
★Image and word association vocabulary builder - when an image is touched the associated word is spoken and the written word displayed.
★Karaoke effect - when a word is spoken during narration then the word is highlighted.
★Touch a word to hear it being spoken.

Three ways to read the book.
★"Read to me" - Listen to the narrated story while the text is displayed Karaoke style. After the narration finishes on a page the child can interact with objects till they are ready to move to the next page.
★"Read myself" - There is no narration but the child can touch a word to hear it being spoken aloud.
★"Auto Play" - same as "Read to Me" except the page advances automatically once the narration is finished. Useful for those long car rides when you want the child to have a complete book experience.
Auryn Apps have kindly given us 5 iPad codes to give away . Please enter via the Rafflecopter below.

a Rafflecopter giveaway
Posted by AppAbled at 08:09