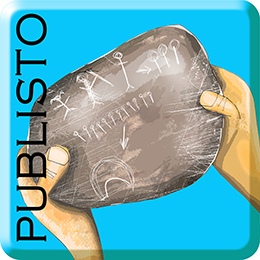 Nobel Prize laureate Kipling tells the story of Taffy, a “mischievous-little-demon-who-never-listens” who, in her effort to communicate an important message, scribbles the first letter. 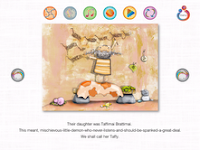 Taffy and her family are introduced.   They are living in the Neolithic period and the setting is achieved with some clever illustrations representing their home but in modern day terms that children can relate to i.e. a teddy bear is depicted made out of rocks, artwork in the playroom is cave art etc.

The story unfolds with Taffy heading off to the river with her father Tegumai for the day to spear fish and catch dinner.  When they arrive at the river Tegumai realizes that he has forgotten his good spear.  Taffy offers to help and go back home and retrieve it.  Tegumai is concerned however that she may fall prey to danger in the marshes and instead decides to make himself a new spear. 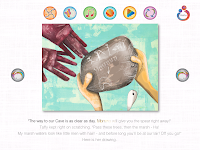 Taffy tries to be patient but her father is taking too long.  She wonders why they cannot simply send a message home to send for the missing spear.  Not long after a stranger from a far off tribe arrives at the riverbank. Taffy asks him if he knows her mother.  The stranger does not understand but is charmed by Taffy so sits down beside her.  Taffy believes he understands her and draws directions on a stone for the stranger to retrieve Tegumai's spear. 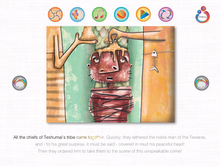 The stranger accepts the stone from Taffy in terror.  From her drawings he understands that enemies surround them and that he is needed to go fetch her entire tribe to rescue them. So he sets off.  He stumbles upon the cave and find Taffy's mother Teshumai.  Teshumai is afraid when she sees the stone and believes that this stranger has harmed her daughter and husband.  She and her neighbors come together to capture the stranger and they tie him up and cover his head with mud! They all head to the river.  It is then discovered that no one is in danger just a forgotten spear and a mischievous child who thought to send a message who is not very good at drawing at all. The message on the stone in time to come would be regarded to be the same practice as writing letters.
This is a very cute story with lovely artwork.   The illustrations are beautifully animated and the user can tap on parts of the illustrations to make sounds, an object move etc.  Settings can be adjusted so the read aloud feature and music accompaniment can be either on or off.  The user can also record their own voice for playback which is a great feature for an older child to practice reading aloud or alternatively for a parent to add their own voice to the story.


In addition to the story there are some games and activities. 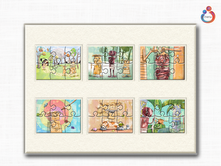 One of which is a jigsaw puzzle. There are six jigsaw puzzles in total wherein the pieces are dragged and positioned into the frame which serve as excellent fine motor skill practice.  The amount of pieces for each puzzle can be customized to suit needs either 6, 12 or 20.
Following the jigsaw puzzles there is a drawing page to color in some artwork with may different choices to select. 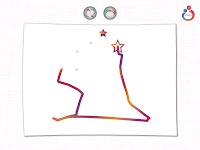 A third game is a connect-the-dot type game with a small star that follows a bigger star. After two failed efforts the correct way is shown. Sound is used to reward success.  Upon completion the outline is a pattern for something i.e. in one instance two fish and it appears on the screen with a musical fanfare.
A fourth game is a matching game that is played with either 16 or 30 cards to change the difficulty level.  Some pretty impressive fireworks appear once the game is won!
A final feature is one where cute postcards that can be written and sent via social media.   I am not a fan of social media within apps that are easily accessible to children so this is a feature I would prefer not to have or at a minimum be done with adult supervision only.
Overall a very nice story and activities to introduce children to the classic writing of Mr. Kipling and to converse about caveman times!

To find out more about Publisto please visit the following links -