SpeakApp is a series of unique language games developed by a speech therapist, who specializes in child language development. The games in the SpeakApp series are based on a wealth of experience in developing language-enrichment games for children. What makes these games unique is the combination of an integrative and enjoyable playing experience with tools for acquiring diverse language skills, while placing an emphasis on the connection between language and cognition.
SpeakApp 1 is one of three games in the series SpeakApp that instill syntactical skills. Each game can be played at different levels of difficulty, thus making it suitable for a wide range of ages and for various stages of linguistic and cognitive development.

SpeakApp 1 teaches the use of the conditional clause, and develops cognitive flexibility via the question “What would happen if…?”. This game is intended for children aged 2.5-6.
How to Play:
SpeakApp 1 includes three games: the Matching Game, the Memory Game, and the Recording Game. Upon opening the application, you must choose the desired language. You can then play any of the three games.  In SpeakApp 1 lite version (and SpeakApp 2 lite and SpeakApp 3 lite) there is also an added Language of Swedish, which is not included in the full version. 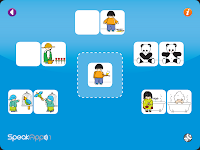 The Matching Game:
The Matching Game consists of three screens. Each screen displays five pictures, with an empty frame next to each picture. Over the course of the game, a picture will appear in the center of the screen. The player must drag that picture to the empty frame next to the matching picture, so as to create a pair of pictures that together make a conditional sentence (“If… then…”).
When a pair of pictures is correctly matched, the sentence will appear briefly onscreen, accompanied by narration in one of the six languages. (The subtitles and narration can be disabled from the game’s settings screen.) After matching all of the picture pairs, the player automatically progresses to the next screen. 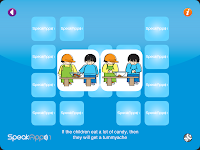 The Memory Game:
The Memory Game consists of 20 cards comprising 10 pairs, where each pair makes a conditional sentence (“If… then…”).
The goal is to find all of the card pairs. When two cards that make a logical sentence are turned over, the sentence will appear briefly onscreen, accompanied by narration in one of the six languages. (The subtitles and narration can be disabled from the game’s settings screen.) 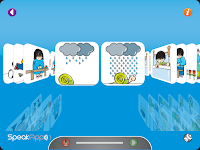 AppAble Opinion:
If you are working on speech development with your child ie, vocabulary, sentences, 'if....... then....' what a wonderful app this is.  The page is not cluttered.  I also like how the 3 different games have the same pictures and text, to reinforce the learning but in a different way - to keep our children interested.  The voice is clear and words are simple.  When my boys were younger we would do lots of things similar to this with pieces of paper (that I would loose).

Currently I am using if... then..... with my daughter, cause and effect, so I am so happy that I have found this app to extend it to other things and being developed by a Speech Therapist, what more could you ask for.


a Rafflecopter giveaway
Posted by AppAbled at 04:20