Developer Chat with Beck and Bo 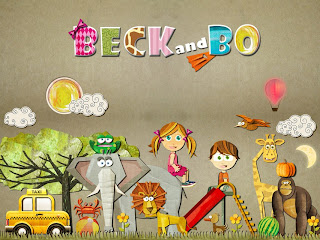 Q. Hi Elpida. Welcome to AppAble. Can you please tell us a little bit about yourself?
A. First of all, I’d like to thank you for inviting us and giving us the chance to introduce ourselves and our app. With your passion and devotion you’ve built a wonderful community for both parents and developers to share ideas and -why not- make new friends.
My name is Elpida Voulgari and I am from Greece. I’ve studied architecture and have received an MSc in Virtual Environments from Bartlett, UCL, London. During my masters I met my husband, Vagelis Katsantonis, an architect as well, who was also taking the same course. Both myself and Vagelis, shared a common passion for computer graphics and programming, and we spent most of our “free” college time programming experimental 3D interactive environments. We soon found out that our personalities and professional interests were a perfect match, so we decided to join forces.
In 2002, we founded react-IN (http://www.react-in.com ), an interactive design agency specializing in the design and development of interactive multimedia technologies with main focus on collaboration, education, design and visualization. One of our most interesting and innovative projects was inviDESK (http://www.invidesk.com), a multi-touch interactive table designed and patented by react-IN in 2006. Based on the inviDESK engine, we developed numerous educational applications for museums, institutions and public events (e.g. olympic games).


Q. Do you have a background in IT? How did you get into the App business?
A. Having worked on various projects and having addressed diverse audiences, we came to realize that creating educational experiences through technology was something both challenging and spiritually rewarding. Following the current trends, we came to realize the huge impact that mobile technology may have on education and child development. Of course there would be a major puzzle piece missing, if I didn’t mention the birth of our son in 2010, which served as a catalyst in shaping our future plans. So from the summer of 2011 our main focus has shifted to the kids’ educational field.
At this point, my brother, Dionisis Voulgaris, joined the team, sharing the exact same interests and passion with us. Dionisis has studied mechanical engineering and has received an MSc in computer science. He is an experienced and talented programmer, with an obsession for detail and perfection. Dionisis and I, are the programmers behind Beck and Bo. Vagelis has also substantial technical knowledge but is mainly the creative mind behind the graphics, animations, sound effects, videos etc. Although coming from diverse backgrounds, we all share a common passion for creating challenging and stimulating digital experiences that stand out through their quality and innovation. When it comes to creating kids’ games we only have one thing in mind: KIDS THEMSELVES!


Q. How was Beck and Bo inspired?
A.  Children learn through active exploration and experimentation. They constantly want to try things out, discover associations and solve problems through trial and error. When children develop their first vocabulary they love to name things they recognize and experiment with their properties. At this stage, storytelling and pretend-play can help them familiarize with objects and put them into context. Small children also need to be praised and rewarded for their accomplishments.
We designed Beck and Bo having all these in mind. The main concept behind our game is to provide an interactive, stimulating environment where children identify objects and use both their imagination and reasoning to figure out where they should be placed in order for them to make sense. In Beck and Bo when an object is touched its name is heard. When placed correctly, it animates and makes its distinctive sound. When all objects have been properly placed, the kid gets to win an animated star and an interactive book. There are plenty of objects and animals to play with and put into unique and imaginative stories.


Q. Is there a story behind the choice of the name?
A. When we were to decide on a name, we made some serious effort to put together a descriptive name that would shortly describe the game’s scope. We finally all agreed that not only these words would fail to convey the game’s original concept, but they could be misleading too. We concluded that naming the game after the two little characters would make it more personal to the kids and more recognizable as a brand. The actual names “Beck” and “Bo” were chosen more like “Hmm, she looks like a Beck…hmm he looks like a Bo”. Of course we took into consideration the easy pronunciation, although our 2.5 year old boy still calls it “Gke Gke Bo”.


Q. How long did the development process take?
A. The first idea was conceptualized on December 2011. We started the development in January 2012 and worked hard for the following 8 months. The game was released on the 16th of September 2012.


Q. Who did you get to Beta-test the app for you?
A. Of course the head of the Beta-test team is our 2.5 year old son, Konstantinos. He is the ideal beta-tester: enthusiastic, willing at any time, honest, extremely thorough, clumsy enough to discover all hidden bugs, and of course he offers his services for free! We also have a few more adorable little kids of diverse ages, whose mothers are more than happy to watch them have fun with Beck and Bo.


Q. I love the fact that the app is based around everyday things that children can associate with. Do you feel there is a gap in the market for apps like yours ?
A. I do believe we have an app that doesn't fall directly in one of the common kids apps categories. For this reason it’s always interesting for us to read the reviews and see how other people receive our app. Some emphasize on ‘discovery learning’, others on ‘pretend play’, some call it a ‘sticker app’ and ‘puzzle activity’ while others find it a nice game for ‘enhancing vocabulary’. So what is Beck and Bo? It is actually all of them, and none of them. We designed Beck and Bo as a fun and relaxing environment for little kids to experiment with objects, animals and activities of  both a familiar and a more imaginative nature. I do feel that there aren't many apps out there similar to Beck and Bo, but I am also aware that being original isn't always easy.


Q. I had two of my kids try out your App and I have to say the Jungle scene was a huge hit with both of them. My son loved the fact that you could make the Jeep move and stop as often as you liked. Do you have a favourite scene in the App ??
A. During our early team discussions on the app, we had some long brainstorming sessions involving the scenes we’d like to design. I have to say that the ideas were endless and we had to put aside some pretty good ones in order to come up with a feasible and time efficient development plan. We decided to have 12 scenes in version 1. The ‘jungle’ and the ‘beach’ were actually the first two scenes inspired and added to the must-list.
Most kids show a special interest for the scenes involving animals like the ’jungle’, the ‘train’ and the ‘ocean’. What I've noticed is that kids, especially toddlers, get obsessed with a particular activity which they enjoy doing over and over again. For example my son could be engaged for 10 consecutive minutes just putting the dog on the trampoline, then in the doghouse, then on the trampoline again, or putting Beck and Bo to sleep and wake them up with the alarm clock.
What we like about the app is that each scene is unique, offering a variety of stimuli and lots of different elements for kids to explore and interact with.

Q. Any other information or advice you would like to pass on to our followers?
A. I would like to say something that I think most developers would like to say if they had the chance. “Give us feedback…tell us what you think…and be honest!”. Most developers are unable to have a clear and spherical view of their product, mostly because they are over-exposed to it, especially in a technical level. So speak your mind, and if you find something interesting don’t forget to share it. It is valuable!
Read more about Beck and Bo on our website: http://www.beckandbo.com or FB page: https://www.facebook.com/beckandbo
Posted by AppAbled at 23:30